It Was in the sixties it all began.
Yes, it was here that started in for Real with Jahn Teigen. It was Eva Jørgensen, now Eva Christiane BorgenGård who discovered Jahn Teigen. She also published the first single of his with the Enemies. The rest came out of Eva’s own label, Artist castle. It was the single Wishes / Not even you. 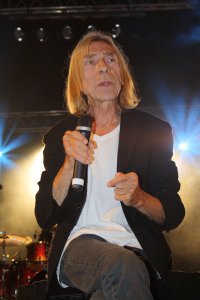 It was also meant for Jahn Teigen and the three others in the group The Enemies that they should be in a musical that Eva had written. It’s called the rest “Help – it`s haunted”. It was written in 1967 in terms of Jahn in dual role as a musician / artist – and a 140 year old musical house ghost with great penchant for crazy display. You should Jahn and his comrades in The Enemies launched. Musicals was meant for children and young people. Norway’s popular child star Anne Mette Pålsrud should also have a major role in this musical. But, soon after the musical was finished by Eva, so it was shelved. The reason for this was too great eagerness to get the musical finish. Eva forgot that famous and great musicians were busy up to several years at a time.
There were also written two major roles for Wenche Myhre and Leif Juster.
Jahn and his three companions in The Enemies rehearsed in the basement of Holtan parents. Jahn was then 17 years and played the bass and sang. John Erik Holtan was 18 and played the organ and sang. Freddy Lepsøe was 16 years, played the rhythm guitar, sang and was the presenter. Freddy Petterson was 15 and played the drums and sang.
Eva had a goal, and it was to make these guys famous. And boy, did she ever!! Eva, you have passed, and a big thank you for it.

Eventually it was many gigs for The Enemies, and Eva was the group’s impresario. One of the first concerts The Enemies had was in a street in Sagene in Oslo. The equipment was ordered out of the touring car, and set up spontaneously in the street. People crowding around where the guys played, which led to some billister had to run the detours to get past. Some of these drivers rolled down the windows and threw acid remarks, but they managed at least to see the name of The Enemies of optimism shone on them in blue writing on the nylakerte used the blue band bus. John Erik Holtan had certificate and brought them back and forth. During the tour, the boys climbed the trees, helping elderly ladies across the street, playing in the sandbox with shovels and buckets they borrowed. All in all – they were noticed.
And then, finally, it should happen. Jahn Teigen and The Enemies to play down the Sjølyst restaurant on Skøyen. The Enemies will start with a slow Beatles tune, and the people hummed along. The Enemies continues with several Beatles songs that were popular at the time. There were even playing western music, since John Erik Holtan was a western fan. Jahn steps up and sings a Tom Jones song, and the audience is clearly impressed with what he managed. The Enemies has gotten the hold of the audience, and did it all with great success.

That summer Jahn and The Enemies had many gigs, but then one day the great thing happens. They’ll play in Denmark, and has been engaged for the whole of August. In Denmark, they play at several places such as. The hope in Aalborg and Bellevue in Blokhus. They played Beatles and Tom Jones songs, and of course it will be playing songs they stand for. Jahn Teigen and The Enemies recieved huge applause and experience from the trip to Denmark. Eventually they set course back for Norway. When they return home to Norway, Jahn record their first single, “Wishes / Not even you”, and it landed at number 6 on the Norwegian top. In the autumn of ’67 the song crawled up to fourth place, and at the bottom, we find Dizzie Tunes from Skien.
And, now it escalates, their second single comes out. This is also on Eva`s Label, Artist castle. The song is, “Let it be me”, and B-side to this is Jahn both composed the music and wrote the lyrics. The song is called “A blind man’s memory”. This is his first recording as a soloist. The Enemies appeared as backing group.
All this happened in the winter of ’67. Later in the New Year came LP with The Enemies. This LP came out on the record company CBS-Phonogram in 1968. The Enemies broke up after a concert in Halden. The year was 1968.

I will refer to:
“Jahn Teigen from Tønsberg to the Grand Prix”. Written by Eva Christiane Borgengård.
“A personal account of Jahn Teigen. Written by Øyvind Brigg and Hans Olav Forsang.